It’s been a rough go for China’s technology sector as Beijing ups regulatory scrutiny on Alibaba (NYSE: BABA) and others, but those headwinds could ultimately prove to be a buying opportunity for prescient investors.

The Global X MSCI China Information Technology ETF (CHIK) is an avenue for playing a rebound in Chinese tech stocks.

CHIK tries to reflect the performance of the large- and mid-capitalization segments of the MSCI China Index that are classified in the Information Technology Sector as per the Global Industry Classification System. CHIQ’s underlying index “incorporates all eligible securities as per MSCI’s Global Investable Market Index Methodology, including China A, B, and H shares, Red chips, P chips, and foreign listings, among others,” according to Global X.

For investors, it’s worth remembering that many of the names Beijing is zeroing in on are internet/consumer discretionary fare, while many CHIK components are business-to-business firms.

“Economic output from Telecommunications, Software and Information Technology in 2020 was $587.4bn, according to the Chinese Ministry of Statistics,” notes Global X analyst Chelsea Rodstrom. “Value added by the sector grew by an impressive 16.9% last year despite the fact that COVID-19 led to low or negative growth rates for several other sectors. Prior to the pandemic, growth was 18.7% in 2019, only 1.8% higher than 2020’s figures, showing the resilience of this sector amid a difficult global economic environment.”

Second Half Considerations in China

There are industry-level differences between CHIK and rival U.S.-focused funds. Additionally, CHIK seizes upon some important disruptive growth themes.

“In response to growing demand from emerging technologies like 5G and electric vehicles, in February 2021 the Ministry of Industry and Information Technology announced a plan to achieve $322.35bn in total electronic components sales and develop 15 electronic component companies with revenue over the $1.5bn mark by 2023,” notes Rodstrom.

That’s one way of saying CHIK is one of the more viable plays on Beijing’s efforts to wean China off dependence on technology imports – a major policy initiative in the world’s second-largest economy.

Rising internet penetration is another longer-ranging catalyst for CHIK, because as that percentage increases, so does demand for communications gear, data centers, and more.

“China is quickly adopting technologies both old and new. China’s internet coverage rate rose from 38.3% in 2011 to 59.6% in 2018,” adds Rodstrom. “Although this number is still low compared to developed countries, some of which have internet penetration rates above 90%, China’s massive population means that it has 3 times as many internet users and 3.75 times as many mobile phone users as the US.” 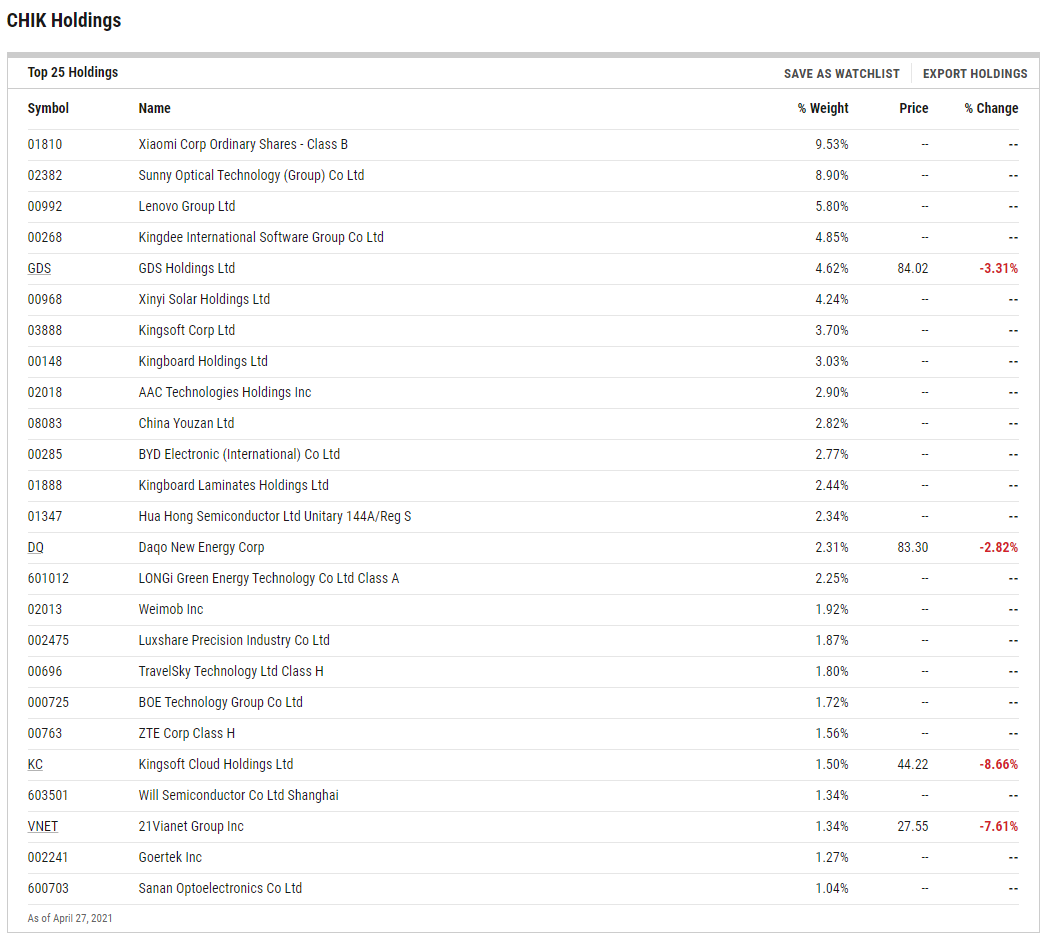 For more on disruptive technologies, visit our Disruptive Technology Channel.

The opinions and forecasts expressed herein are solely those of Tom Lydon, and may not actually come to pass. Information on this site should not be used or construed as an offer to sell, a solicitation of an offer to buy, or a recommendation for any product.